This post contains photo's which people of a nervous disposition may find distressing (I know I did!) or if you have a fear of feet - podophobia

I mentioned on a Reasons to be Cheerful post I would write and share the photo's if people were interested......you were!

The problems with my foot started about six weeks ago. I thought it was athletes foot, which is pretty yuk at the best of the times. I treated it, but it didn't go away. In the back of my mind I was thinking 'it can't that, I need to visit the pharmacist or doctor some point soon'....but then the foot took over!

I woke up in my hotel room, the same hotel I fell and broke my bum in (that's a whole different post!) and my foot was sore. I put my shoe on and was now limping! Through the day, the pain got worse but I did the stiff upper lip thing, until I took the bull by the proverbial 'shoe' horn and took a look. It was red, sore, mouldy looking and very wet. That was it, straight to a drop in centre in Basingstoke, I was not having my foot dropping off!

The centre was brilliant, got seen by a lovely nurse practitioner, who thought it was trench foot (WTF!) I am not a World War 1 soldier in the trenches! But when I googled it, later in my hotel, it turns out it's more common than you think. You get it if your feet have been in trainers or wellies for long periods of time. Festival goers tend to get it, especially Glastonbury apparently. 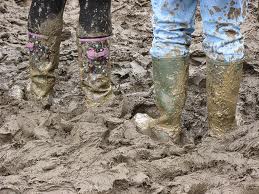 The treatment is keeping feet clean and dry, so off I toddled to buy (because I'm still working away) loads of socks, talc and painkillers, because at this point I have a pronounced comedy limp!

Next day, woke expecting a miracle..........I was disappointed. Manages to get through the day and drive 3.5 hours home. When I got there though the pain was immeasurable and I'm so thankful to MrC, who helped me bathe them, assess the damage and then ring our out of hours doctor. She diagnoses a severe infection, prescribed antibiotics and codeine, which meant I got some sleep!

Since then, I've:
Visited the doctor 6 times, 2 were out of hours
Had about 3 different diagnosises
Been asked six times if I am diabetic
Been prescribed 4 separate doses of antibiotics
Endured my foot being a mass of huge painful blisters (one of which burst in the shower!)
Had to wash them 3 times a day for 10 days in magnesium permanganate which turned them brown!
Had sticky smelly feet, which oozed and squelched and generally disgusted all those around me
Walked around work in my fetching pink fluffy slippers, because they are comfortable and warm.
Applied anti-fungal creams
Changed my socks 3-4 times a day and my shoes twice a day
Applied emollients when the fungal cream dried the foot out to the point of cracking and bleeding!

I'm now onto hopefully the last diagnosis, not infected athlete's foot, not trench foot, but eczema which has become infected. This seems the most likely. Have loads of different types everywhere else, why wouldn't I now have it on my feet??

So I've decided, this is my last course of antibiotics, the steroid cream will work its magic and I will be able to let go of my comic limp. Positive thinking and all that!

WARNING - photo's of feet about to be revealed!

So for those people who like the gammy, here are the promised pictures, I did warn you! I couldn't find the one which showed the sole of my foot as one big blister, think I gotten bored by then! 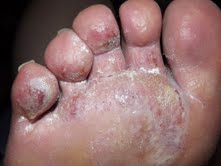 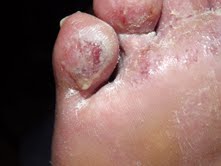 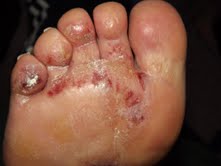 Moral of the story........look after your feet, you miss them when they dont' work properly!